What makes a REAL Belgian waffle? And where in Philly can you find one? 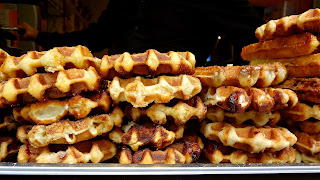 Though Belgium is typically under the radar when discussing the world’s best cuisines, spending the past semester abroad in Dutch-speaking Leuven made for many great food experiences. As a University town with 40,000 students, Leuven had no shortage of the culture’s most famous street foods, waffles and fries. During my four-month sojourn, I also got my fill of Belgium’s legendary beers and chocolates. I will be discussing these phe-nom-enal foods in a series of posts—starting with waffles, a treat enjoyed by both the Dutch-speaking and French-speaking regions of Belgian. 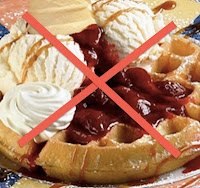 The name waffle, or wafels in Dutch and gaufres in French, comes from the 12th century French word “wafel” for “honey bee hive” and emerged from the treat’s resemblance to a honeycomb. The first waffles were sold by street vendors during religious celebrations, and were made mainly from water and flour. Still today, waffles are not eaten by Belgians at breakfast, but instead are sold as street snacks.

There are actually two varieties of Belgian waffles, Liège and Brussels—neither of which resembles America’s “Belgian” breakfast waffles. Our Belgian waffles—crusty, circular, and often served with ice cream, syrups, and fruit toppings—are in reality a far cry from authentic Belgian waffles. 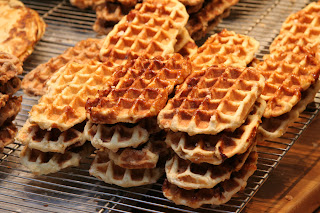 The Liège waffle, invented in French-speaking Liège in the 17th century, is considered the original Belgian waffle and my personal favorite of the two. It is made from a thick dough that results in a dense and chewy waffle with uneven edges. The key attribute of the Liège waffle is its crunchy and golden exterior, formed when chucks of sugar in the dough caramelize. As you can imagine, the smell of hot pressed Liège waffles carrying through the streets is mouthwatering, and around midday in Leuven people can be see lining up for the warm and sweet treats from vendors. 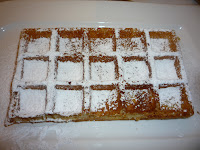 The Brussels waffle, a more recent 19th century creation from Dutch-speaking Ghent, is made from a thin, yeast-leavened batter, resulting in an airy waffle with an even rectangular shape and deep pockets. Brussels waffles are traditionally served with a dusting of powdered sugar and are lighter and less dense than the Liège variety. To the chagrin of some locals, Brussels waffles can often be found in tourist areas topped with whipped cream, fruit, or chocolate syrups. The Brussels waffle was the precursor to the American-style Belgian waffle, making its debut at the 1962 Seattle World’s Fair. 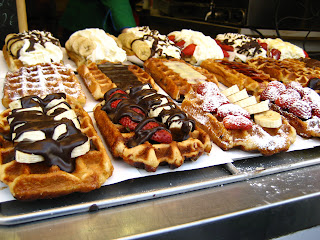 Curious to test out a Belgian waffle yourself? Here in Philadelphia, Bonté Wafflerie & Café claims its waffles are authentic Belgian, street-vendor style. If you want to experience a truly authentic Liège waffle, order the Sugar Waffle. For those that are not ready forgo toppings, Bonté also offers its waffles with a variety of nut, fruit, and chocolate toppings, as well as ice cream.