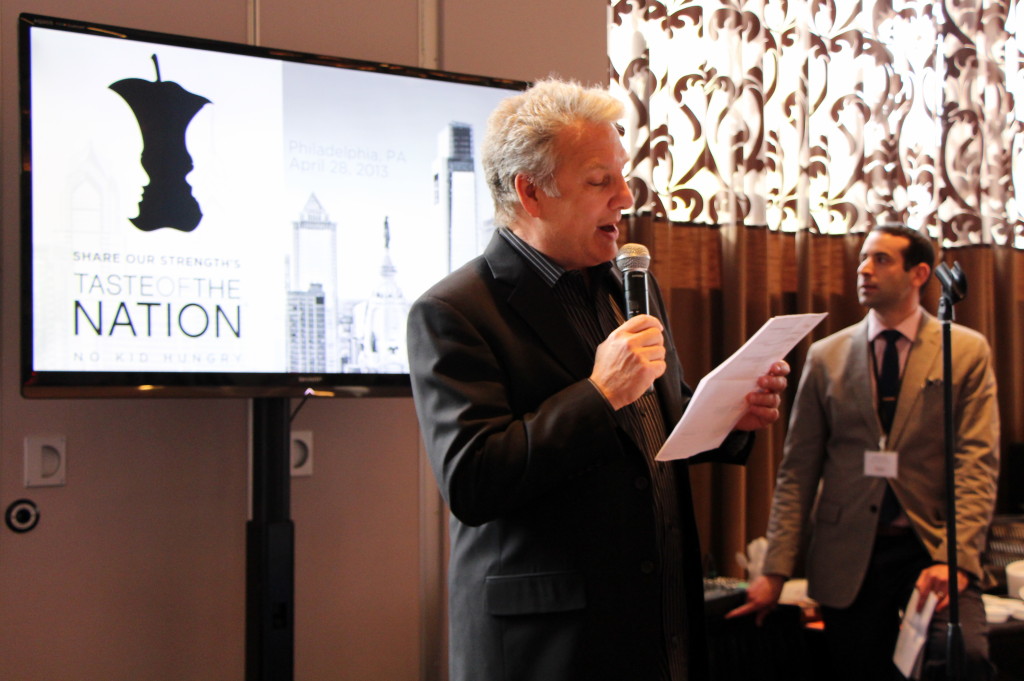 Share Our Strength’s Taste of the Nation is the biggest showing of the “No Kid Hungry” effort in Philadelphia, supporting groups like Philabundance, Greater Philadelphia Coalition Against Hunger, The Food Trust, and the Pennsylvania Hunger Action Committee. The fundraiser took place this Sunday, April 28, at the Hotel Monaco (433 Chestnut Street), featuring food from 25 of the city’s best restaurants along with specialty cocktails, wines, premium beer, and a silent auction.

Marc Summers opened the festivities with a few remarks about the importance of supporting initiatives such as those promoted by Share Our Strength.

Chef Chair David Katz (of Meme fame) served up Creekstone Farms brisket tacos along with his talented nephew/sous chef. Katz said in an interview that the fundraiser was organized because “no kid should go hungry in America. While guests will enjoy amazing food and drinks, the most satisfying part of the event is the contribution to feeding kids in need in the region and beyond.”

Chef Nathan Volz and the team at 10 Arts whipped up lamb rillettes paired with pickled vegetables, a crisp baguette slice acting as the foundation.

Vernick’s tuna poke was a tropical treat composed of sesame, sweet soy, chopped macadamia nuts, candied tamarind, and cilantro (and was one of my favorite bites of the night!).

Lee Styer and his team from Fond had smooth pâté for guests to devour by the slice.

Chef Gina Rodriguez of Serrano introduced guests to this pop-in-your-mouth dumpling filled with crab and shrimp and topped with glowing orbs of salmon roe.

Tuna tacos (more like tostadas, no?) were presented by El Camino Real.

Alla Spina, run by chef Mike Deganis and his team, had pork trotter involtini, using lettuce wraps as an alternative to the traditional “roll up.”

Chef Joncarl Lachman from Noord introduced a Scandinavian classic Maatjes Haring Broodjes. Also known as soused herring (in which the fish is soaked in a mild preserving liquid), the fish was sandwiched with cucumber and pickled onions.

A silky beet-based brew from chef Pierre Calmels and the crew from Bibou was a crowd-pleaser throughout the evening.

Check out Part II to see what else was at Taste of the Nation 2013!