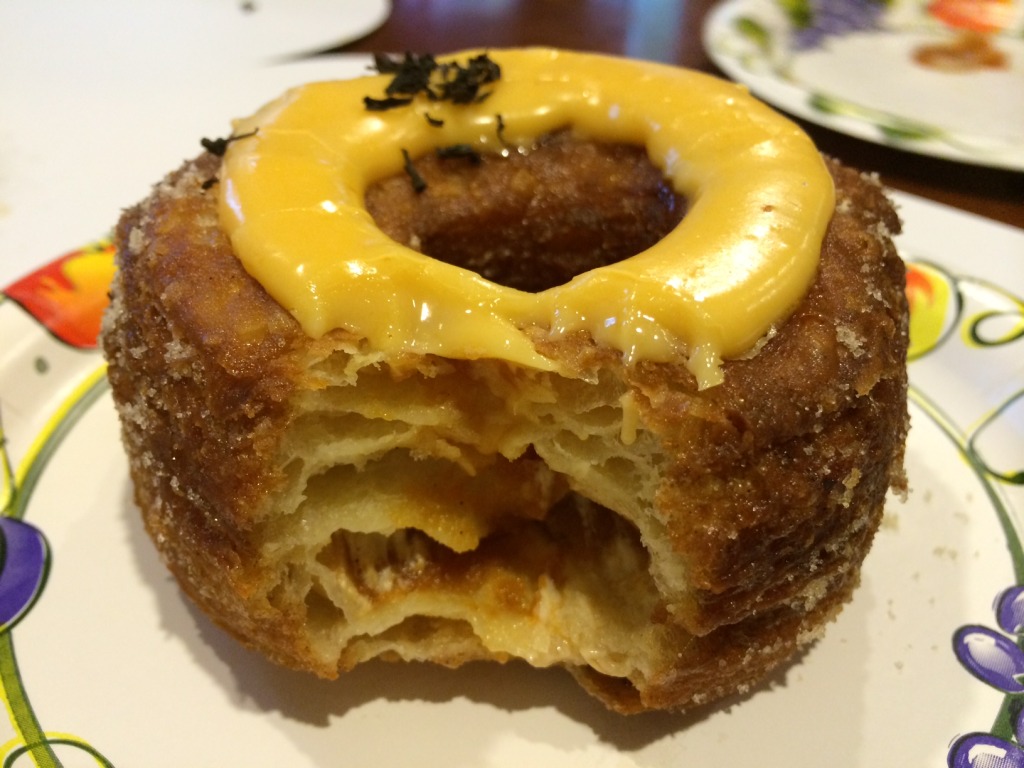 This guy is the real deal– born out of none other than SoHo’s legendary Dominique Ansel Bakery. This month’s long-anticipated cronut flavor is pumpkin chai, and it evokes just the right amount of decadence with a splash of Halloween. Ansel, who was recently dubbed the Willy Wonka of NYC, managed to spin the season’s most basic flavor into something unique and worthy of an early morning trip from the Jersey suburbs to the city (and back again.) My cousins, well-versed in the art of Ansel, braved the New York City rain and traffic to bring a dozen pre-ordered cronuts back for the family. But this was a small feat given the three hour wait they endured just a few months before. And even that absurd wait-time pales in comparison to one of their coworkers, who spent three months perfecting an algorithm that syncs several computers to blast the bakery with emails, effectively locking down a series of pre-orders the moment the form goes live. Although I had heard the buzz, I couldn’t believe that anyone would go to such lengths for a pastry. I used to think I had a serious obsession with dessert, but this was on another level. So, I figured that this cronut would never live up to the impossibly high expectations that had been set for it.

I was wrong. Ansel’s cronut is not to be underestimated. From the initial aroma to the last bite, this pastry was an experience. Fresh out of the box, it came cloaked in soft sugar, topped with a ring of sweet icing and a sprinkle of chai spice. From the side, we could see the individual layers of thin, crisp dough. Thereafter, each bite was a perfect mix of the crispy, sugary outer shell and soft, airy dough inside. As if that weren’t enough, it was filled with a rich and savory pumpkin puree, so generously applied that it oozed from the sides as I made my way to the center. The pumpkin was not too sweet, and it balanced what would otherwise be a sugar overload from the icing and outer crystal coating. All in all, it was a perfectly crafted and subtly intricate treat. There really is nothing else like it. It’s an experience that any foodie deserves, and although I really can’t condone waiting in a three-hour line, a special trip to this SoHo staple will definitely prove rewarding for those who are patient and lovers of all things sweet.

For the rest of my fall break, I was feeling inspired, though not quite enough to endure the complicated, three-day marathon that is baking a cronut in Dominique Ansel style (the recipe was just released by the genius himself). So, as a busy college student with a more limited budget and time, I threw together my own version of a Milk and Cookie Shot, which is another of his world-famous creations. After a little bit of research, I discovered that even this seemingly simple dessert would require a lot of trial-and-error and some level of baking skill. And as much as I aspire to the contrary, I’m no great baker.

So I took the easy way out and created the cookie dough cookie shot. It took all of ten minutes and three ingredients. I bought a roll of chocolate chip cookie dough, a bag of mini chocolate chips, and a carton of milk. I cut a slice of cookie dough, shaped it into a small cylinder, and cut a hole into the center to make room for milk. I sprinkled the chocolate chips along the rim, poured in the milk, and had my very own make-shift Milk and Cookie Shot. If you decide to make this yourself, try melting some of the chocolate chips and apply them to the inner walls and bottom in order to prevent the milk from seeping through. And feel free to experiment with different kinds of dough and filling. In keeping with Ansel’s vision, you could try pumpkin cookie dough filled with chai tea. Hopefully this easy recipe will tide you over until you next make it to the city to experience the real thing. It’ll be worth your while.