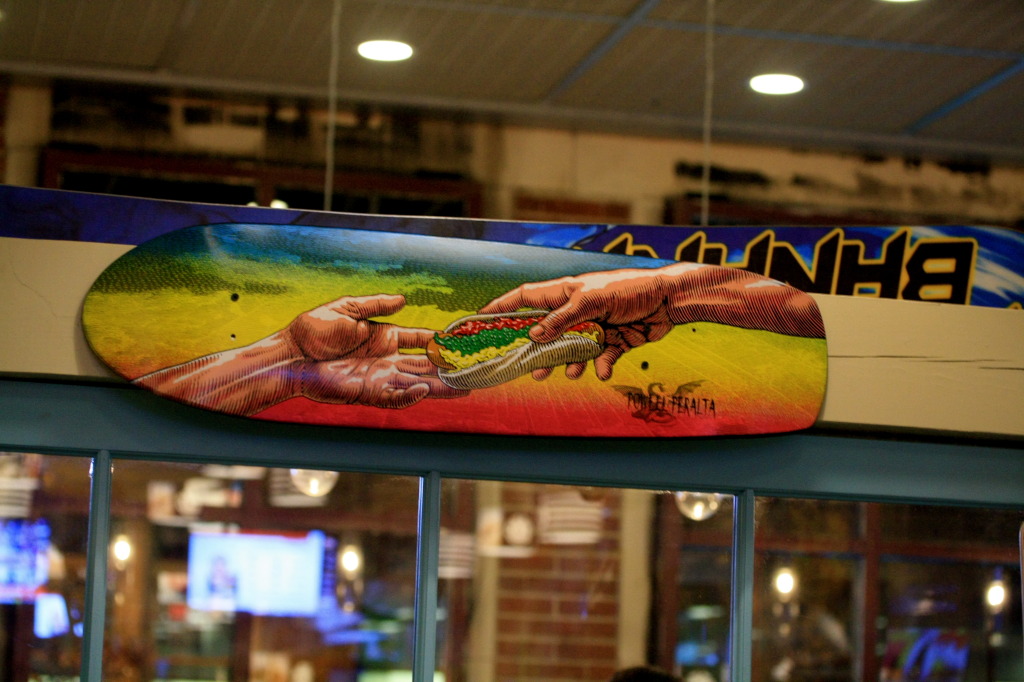 If you’ve been yearning for a place with a California surfer vibe and tacos to go with it, look no further than the new Wahoo’s Tacos and More that opened Thursday on Drexel’s campus.

Wahoo’s is a successful West Coast chain of Mexi-Cali cuisine, boasting over 50 locations on the other side of the country. We should be honored that Philadelphia’s University City was chosen as their first opening on the East Coast.

The space is decked out with a myriad of board sports gear along with the odd mountain bike, lending it a laid-back, fun atmosphere.  It also has a full bar, a separate counter for ordering food, and lots of space for sitting and watching sports play on the plasma screens located throughout the restaurant.

The owners–Wing Lam, Bill Van Gilder, and Jeff Mattes–are extremely friendly and very excited about the opening in Philadelphia.  They plan on being very involved in the community, sponsoring adventure sporting events such as snowboarding and mountain biking, and charity events like their Christmas gift donation event.

Curious about the link between sports and food, I asked them why they chose to pair the two.  Wing, one of the founding brothers, is an avid surfer and snowboarder, so for him sports and food are logical pairings.  Indeed, you never have a sporting event without food!  Together with Bill he helps organize large snowboarding events, even helping to put on the Sochi Olympic Winter Games.

Alright, now lets talk food! Wahoo’s offers a variety of items such as tacos, enchiladas, burritos, taquitos, and rice bowls that can be customized a la Chipotle or ordered as a set menu item.  The food is a fusion of Mexican and Asian influences, with offerings from carnitas to teriyaki-marinated vegetables.  Of course, being called Wahoo’s fish taco, the specialty here is obviously the fish.  They offer grilled or cajun-spiced wild caught mahi mahi fish as a protein option in their tacos, burritos, enchiladas, and rice bowls.

The cajun-spiced fish rice bowl I tried had tender, pleasantly spicy fish complemented by the fresh citrusy slaw and rounded out by the deeply flavored white beans.  They also offer solid chips, guac, and salsa, and their “Maui” onion rings are puffy and light.

Inside Wahoo’s, it’s easy to imagine that outside the doors the California sunshine awaits.  It’s worth the 20 minute walk from the high rises, if only to provide a temporary escape from the frigid reality of the Philly winter.

If you’re into snowboarding, skating, or biking, make sure to stay posted for events that Wahoo’s will be hosting!

Wahoo’s Tacos and More
3180 Chestnut Street (across from Yogorino)
http://wahoos.com/

~Elena Crouch (check out my own blog at www.lasbobba.com!)