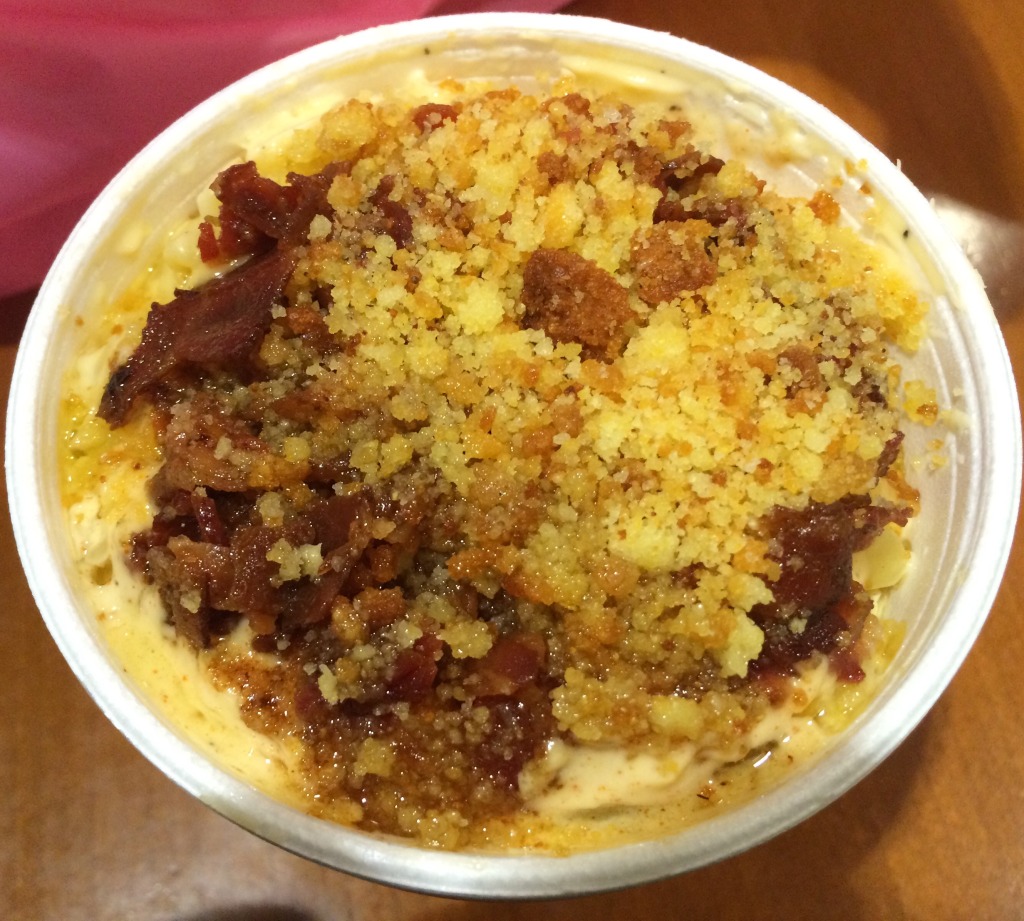 Food Truck Fridays is a column by sophomore Will Constan documenting all the tasty mobile treats in Philly.

Mac Mart is a food truck I have been chasing for a couple of weeks now. They move all over the city, and they are frequently a short walk from Penn, but I have not actually been able to go to Mac Mart until this week.

Mac Mart has gotten a huge amount of press attention in the past couple of years. It has been reviewed in everything from business journals to high end food publications. Mac Mart was founded by a Drexel grad a couple of years ago with the goal of bringing an American icon, mac and cheese, to Philadelphia in an innovative and interactive way. The truck gives you the option of building your own mac and cheese using an extensive list of toppings and two different types of base mac and cheese. They also have a menu of a bunch of their own creations. I decided to try two of the mac and cheeses off of their set menu.

“Not so basic” Bacon Bowl Mac

This cup used Mac Mart’s creamy “Original” Mac and Cheese as its foundation. The Maccaroni was well cooked enough to be tender, but not so much so that it became a sad mush. Of course, mac and cheese is nothing without a good cheese sauce. Fortunately, Mac Mart infuses their mac and cheese with an exquisite and gooey cheese sauce that is satisfyingly creamy, without being runny. I think the strong point of the sauce is its cheesiness. It has a full and developed cheese taste but is not so overwhelmingly cheesy that it feels like I’ve eaten a full wheel of cheese (not that I’ve done that, recently).

This bowl only has two toppings, the first of which is obviously a favorite of mine, bacon. But, this bacon is different from any other food truck bacon that I have ever had. It swaps the usual fattiness of food truck bacon for a full meaty taste and texture. The lack of fattiness makes it lighter, which I think is desirable when you’re already devouring a massive cup of rich mac and cheese. The bacon actually has a slightly sweet taste to it, which leads me to believe that it is a maple or brown sugar seasoned bacon.

Sprinkled on top of the mac and cheese is a parmesan-panko crumble. It tastes and feels exactly as advertised, a crumbly amalgamation of parmesan cheese and panko bread crumbs, adding a nice crunchy texture to the creamy mac and cheese, which really ties the dish together. If you’re looking for a simple go-to at Mac Mart, this is what you should order.

This cup was considerably more elaborate than the “’Not so basic’ Bacon Bowl”. It starts with the original base mac and cheese, which is the same cheesy, gooey and creamy pile of excellence that is Mac Mart’s “Original Mac and Cheese”, except this time the sauce is infused with jalapenos. People sometimes shy away from jalapenos because they think they are too spicy; fortunately, Mac Mart puts just the right amount of jalapenos in this mac and cheese so that you get all the flavor of a jalapeno with enough heat so as to add to the mac and cheese without obscuring any of the other flavors in the cup.

The meaty and slightly sweet bacon from the “’Not so basic’ Bacon Bowl” makes another appearance in the “Cowboy Cup.” Mixed with the bacon is an old favorite of southern BBQ, cornbread. It comes in the form of a buttery and slightly crunchy cornbread crumble. It tastes exactly like a cornbread that you would pair with a rack of ribs at a southern BBQ joint in July (or at Freddie’s for you House of Cards fans).

A homemade buttermilk ranch sauce is drizzled on top of this already mouth-watering meal. Admittedly, when I first ordered the “Cowboy Cup”, I was concerned that it would be slathered in ranch to the extent that it would just taste like a cup of ranch with some pasta mixed in. However, staying true to the description, there was only a small drizzle of it. It had an obvious buttermilk taste, which I think is a huge improvement over the comparative blandness of most ranch sauces. I wish I had an opportunity to test this ranch on its own to get a more complete sense of its taste.

The strong point of the ranch is that it provides a cooling effect to contrast with the heat of the jalapenos and the warmth of the mac and cheese. The ranch is to this mac and cheese as celery sticks are to buffalo wings, a cooling companion that dramatically enhances the experience. Although the “’Not so basic’ Bacon Bowl” is a strong player, the “Cowboy Cup” is the winner in my book.

I am more than looking forward to my next trip to Mac Mart. That being said, I have two minor complaints. All of the add-ins (crumbles and bacon) are put on the very top of the Mac and Cheese, rather than being mixed in. Also, the container for the Mac and Cheese is too tall to allow for easy mixing of the toppings. However, these complaints are so minor compared to the symphony of flavor that each bite of Mac Mart’s mac and cheese provides, that you should probably ignore them and go to Mac Mart as soon as you can. I know I am.