The Best Tacos in the Italian Market 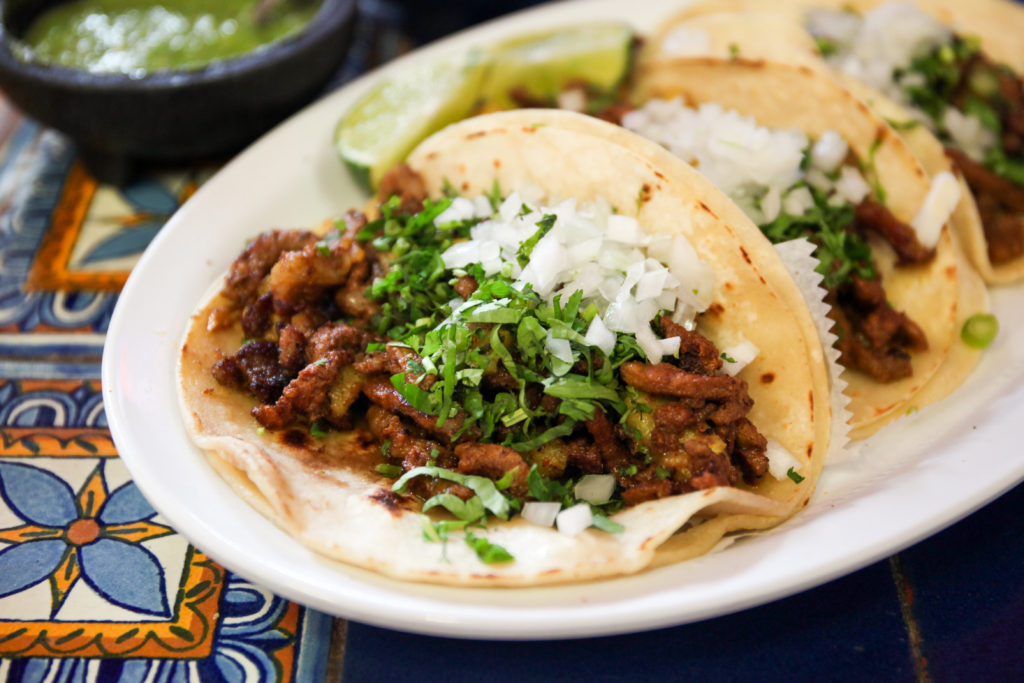 Article and photos by Leah Sprague

The Italian Market, contrary to its name, is full of great small taco restaurants. The Penn Appetit decided to try 6 of the top taco places so you don’t have to (or, really, because we wanted an excuse to eat a lot of tacos).

We began our trek at Blue Corn, an Oaxacan restaurant famous for their blue corn tortillas. Starving, we forced ourselves to order only 1 taco per person because we knew we had many more tacos to come.

The Blue Corn tacos are steak pastor, pineapple, bell pepper, onion, and melted cheese. The meat was the star; tender and flavorful. We were a bit disappointed by how pricy the tacos were ($4.67 each after tax and tip), but the taco was a good size and delicious.

Next up was Taqueria La Veracruzana, a no-frills restaurant with pretty tiled tables. The table came with chips and a delicious thick red salsa. The meat in the Al Pastor was not quite as flavorful or tender as Blue Corn, but smothered in their salsa it was perfect. The tortillas were also great, and seemed to be a corn and flour blend.

One of the best parts of Prima Pizza is its’ name. Don’t be deceived; they only sell Mexican food. With no frills and limited seating, Prima Pizza sells tacos that are greasy and delicious.

After being named the new restaurant of the year by Bon Appétit in 2015, El Compadre (formerlly South Philly Barbacoa) is a can’t-miss taco spot on our list. They are most famous for their lamb barbacoa tacos. A little smoky and untraditional, they live up to their hype. Be sure to say hi to Christina, the owner who is there seven days a week.

We’re only 4 tacos in, and one of our Taco Crawl members already admits to have “taco’d so hard” she can’t go on.

Two of our Taco Crawl members leave. The rest of us venture on.

Trying the fish tacos was arguably a mistake, but we wanted some variety. The tacos are topped with shredded cheddar cheese and iceberg lettuce, both of which were disappointing. The interior felt like a fast food joint, and the overpriced tacos did not make up for it.

We’re down to just 3 people for our final stop. We’re full and tired, but push on for the sake of tacos. The most adventurous taco shop we visited, Los Gallos, is a mile south of the Italian market. After 5 tacos, the 15 minute walk was welcome. Huitlacoche, or corn fungus, is a delicacy in Aztec cuisine. It is a deep blue and has a texture and taste similar to mushrooms. It is worth trying at least once!

Show off to your friends by pretending you go to the Italian Market all the time: Prima Pizza

Want to try your own Taco Crawl, or just follow along? Check out this map!

Tips for your own taco crawl