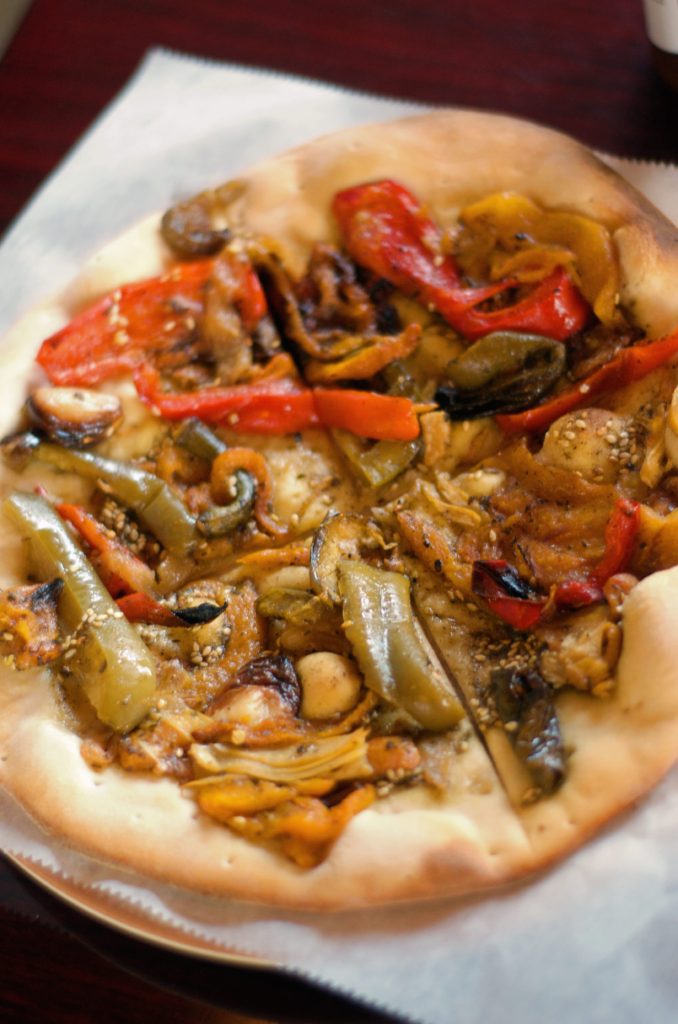 From the outside, one wouldn’t expect to find such a charming and bustling eatery inside of the old stone building that Manakeesh Cafe & Grill calls home. Nestled on the corner of Walnut and 45th Street, Manakeesh Cafe & Grill is just a 10 minute walk from Penn’s campus. Coming through the front doors, you’ll enter the main self-serve restaurant, with the sweet and intoxicating fragrance of freshly-baked baklava drawing you into the Cafe and Bakery that’s segmented off in a separate room to the right. With an ambience characterized by the string lights, hanging rugs, and quaint lebanese music playing in the background, Manakeesh gave off a charming and welcoming vibe.

Manakish (also spelt as Manakeesh, Manaqish or Manaeesh) is a popular Levantine dish particularly prevalent in parts of Lebanon, Israel, Syria, and Jordan. Manakeesh typically consists of a baked flatbread topped with spices, cheese or ground meat. Despite being often compared to its more popular flatbread cousin, Pizza, Manakeesh is distinct through the use of aromatic herbs such as thyme, and its “ridge” covered surface that helps to keep all the toppings in place. Named after this dish itself, I was keen on trying the restaurant’s take on a vegetable Manakeesh.

It was also my first time trying Manakeesh, and I was pleasantly surprised. The crust is thinner and crispier than it’s more familiar counterpart, pizza. It’s dough lacked the “yeasty” flavour associated with most breads, and was rather reminiscent of an unleavened flatbread. It was topped with roasted peppers, artichokes, onions, garlic, and lots of aromatic herbs.

Despite being more than full, we knew we couldn’t leave without trying their famous baklava. While deciding on walnut, pistachio or cashew baklava, we also noticed some students studying in the cafe. Although the trek to Manakeesh might be a little farther than that to VP or Huntsman, all the students seemed pretty content studying alongside their baked goods and steaming hot spiced tea.

In the end, we opted for the classic pistachio baklava and were not disappointed! For those of you who might not be familiar with baklava (hopefully not that many, because it’s DELICIOUS), it’s essentially a sweet pastry made from layers of filo dough, filled and topped with roasted nuts and soaked in a fragrant syrup.

All in all, I would highly recommend trying out Manakeesh. It’s a lively and charming eatery with authentic Lebanese food and pastries at a relatively affordable price point. I’m definitely looking forward to spending some relaxing weekend mornings working in the cafe!