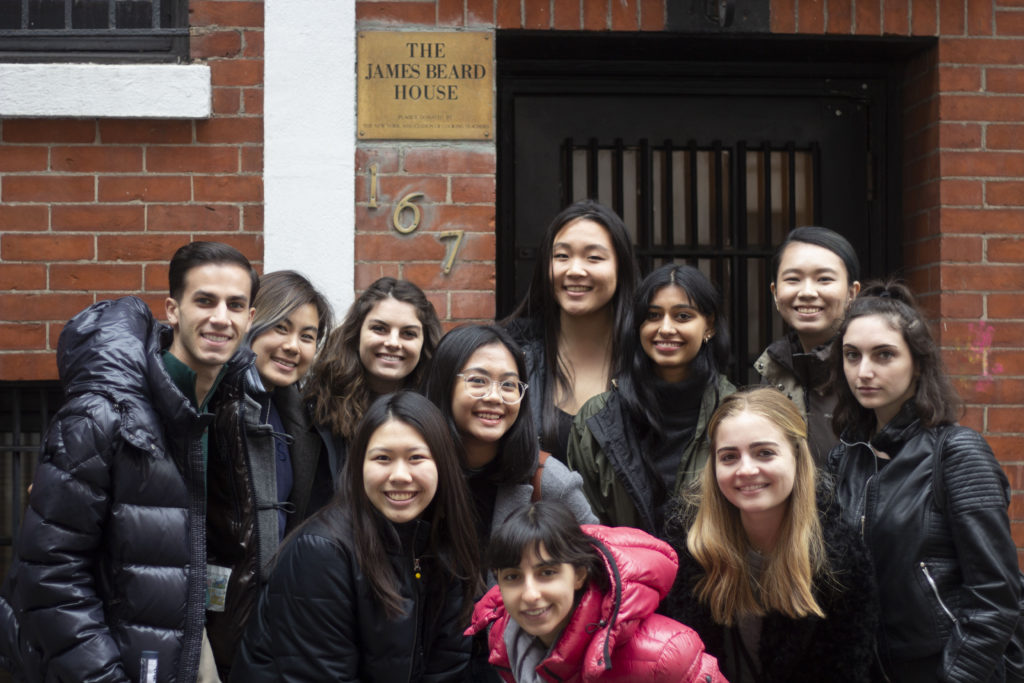 I’m not the next “Top Chef.” I’m not going to culinary school. In fact, I can barely cook dinner for my family at home. However, I love food and (I think) I know how to write, and that’s what drew me to write for Penn Appétit. Over the last few months, our editorial team meetings have become discussions over how we as writers can communicate the experience of food. Between rounds of editing of each other’s articles, we deliberate over cooking techniques, what food trends are important to our peers, and how we can generalize our message about experiences with food to our audience.

As I’ve grown to love writing for the magazine, I’ve thought about what a career in food might mean for me. When given the opportunity to take the Penn Appétit “Career Trek” in New York City, I jumped on it, eager to see how, even without cutting edge culinary skills, I could work in the industry. I signed up, and the next think I knew I was waking up on a Friday morning at 6am and heading to 30th Street Station.

After getting off the MegaBus in New York City, our first stop was the James Beard Foundation (JBF) house in West Village. We were ushered into the historical brownstone and brought into the living quarters of the late James Beard, acclaimed chef and icon who championed American cuisine. Maggie Schoenfarbe, Content Manager at the James Beard Foundation, took us through the kitchen, through the outside space in the back, and upstairs to the dining area. When James Beard passed away, the space was converted to a restaurant where premiere chefs guest-cooke and host dinners. “It works like any other restaurant,” says Maggie. “What people don’t know is that anyone can make a reservation here!” We had a Q&A with some of the members of the JBF team who work to preserve his legacy by hosting the James Beard Awards, organizing James Beard Greens events for foodies ages 31 to 39, working to promote environmentalism in the restaurant world through JBF Impact Programs for food waste and sustainable seafood partnerships, and lifting up those in the food world who promote the highest standards of integrity and respect. I was captivated by the way the members of the JBF team had fused their love for food with making a positive change in the community. Despite their different skills—marketing, finance, social media, event planning—they all converged around food.

Next up was Magnolia Bakery in Lincoln Square. We were brought to the back room and heard from Bobbie lloyd (Chief Baking Officer), Ned Semoff (Creative Director), and Sara Gramaling (Vice President of Public Relations) about the bakery’s mission and history. Bobbie was so emphatic and assured about the vision of Magnolia, I was captivated from the get-go. It is one thing to have a successful business; but, to make every food item fresh every day, focus on meaningful partnerships, and not stray from the brand—now that’s a feat. Not to mention, Magnolia has accomplished all of this and still holds the title of tastiest cupcakes around. I was once again inspired by the grace with which they talked about their brand. To illustrate: at one point, when asking about marketing, Sara advertised that they only pay social media influencers in product. If people ask for money, they decline the partnership. They believe so much in their ingredients and message that they don’t feel pressure to pay the thousands of dollars for Instagram posts. I’ve never been a huge baker or dessert connoisseur, but I was stunned after our visit to Magnolia. A cupcake, a brownie, a cup of banana pudding—everything perfected, marketed, and sold with tremendous forethought. Our visit at Magnolia left me certain that the food industry had its strength in the conviction its leaders and the power of brand. At Magnolia, they stay in their domain—not searching for currents food fads or feeling like they have to acquiesce to movements towards healthy desserts—and don’t worry about anything else because their customers love what they provide.

After Magnolia, we took the subway downtown to Lower Manhattan where we visited the Food & Wine offices. Nina Friend, a University of Pennsylvania and Penn Appétit alum, brought us into the wine room that overlooked the Hudson. There was a collective jaw-drop when rows of wine filled our sight as we filed into the room. As we nibbled on the cookies that were on the table for us, Nina and two of her colleagues explained how they found themselves at Food & Wine when they realized that they had a passion for both food and writing. They talked about the day-to-day schedules of their jobs and the surprises they’d discovered when they started in food journalism. I was struck by their confidence and responsibility; they were all in their early 20s, and had already found their niche. I was empowered by this visit because it gave me comfort that there was a place for me in the food industry if I wasn’t going to be cooking.

We went back uptown for our final stop: Hillstone Restaurant on Park Avenue. We were taken to the back of the restaurant and ushered into booths. The Culinary Manager, Anthony Simasek, spoke to us about his story and the mission of Hillstone Restaurant Group as we ate the food brought out for us. Chef Simasek talked about how Hillstone’s goal is consistency and quality. As I rotated between bites of the kale salad, the chicken sandwich, and sushi, I realized this for myself. The food had a masterful simplicity, and it was good, really good. Chef Simasek told a captivating story about how he found himself at Hillstone after he found himself dissatisfied with his job in finance. Hearing Chef Simasek’s story was a good reminder that it can be a windy road to finding what we all want to do with our lives; however, if it’s meant to be and you are willing to put in the work, it’s possible to make a name for yourself in the food industry from whatever background you have.

Between my Penn Appétit peers and the people we had met with, we represented a diversity of background and interest. However, we were connected by the magic of food. While I’d naively thought I’d have a concrete idea of what I wanted to do with my life by the end of the day, I didn’t. However, my curiosity was sparked by the conversations we’d had around NYC, and that was even more beneficial. I knew that the food industry was satiating (literally and figuratively) for people who loved food like me and that there was a lot more to the industry than cooking and writing about food that I still had to discover. But, for now, I’ll just stick to food writing…thanks for reading!