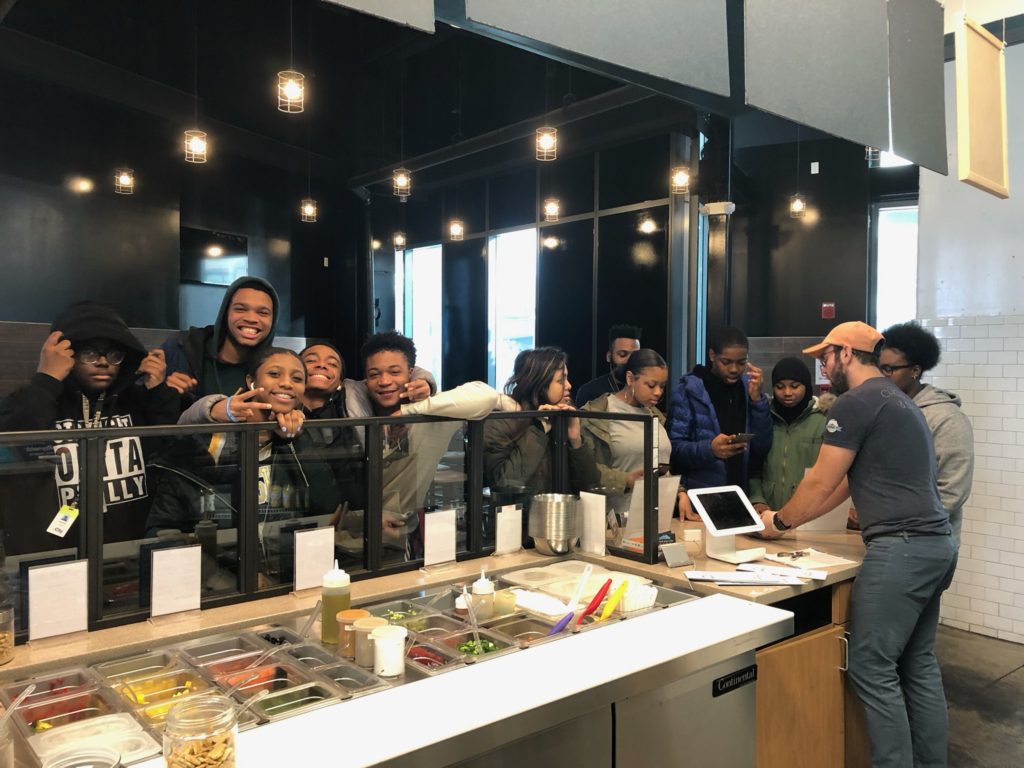 I set out for Schmear It’s in-store location just off of 36th and Market in search of Sadie. Hopefully Dave. When I reach for the double glass doors, an employee equipped with a baseball hat, bagel tee, and broom steps aside and holds them open. He smiles kindly and goes back to sweeping.

Directly in front of me is the order counter. To the right, seating. To the left, a colorful message board that reads “Girls Rock Philly” in big letters. The special today is “Schmear the Patriarchy” for $5.50.

“Morning. Is Sadie around?” I ask. A college-age girl (donning a bagel apron) points behind me. Sadie Pennington, Director of Social Impact, is situated at the counter with a faded hoodie and a stickered-laptop. “Hi! Grace?” She waves me over.

Once we’ve introduced ourselves, she decides to flag down Dave Fine, Schmear It’s founder. She calls out to him and, to my surprise, turns out Dave is the guy with the broom.

Dave nods, but still smiles. “It was 6 to open up here, but the previous day was 4:45. That was earlier than usual though ‘cause we had a big truck event out in the suburbs.”

“What came first: the truck or the store?” I ask.

He grins and tells me, “The truck, actually, was first.”

Even though the Schmear It truck spends a lot of its time smack in the center of Penn’s campus, its presence is subtle, hiding below the Class of 1920 bridge near 38th and Spruce. Dave graduated from Penn in 2011 and, before he started Schmear It, worked for non-profit based out of Baltimore called Community Health Charities.

“I really did enjoy that aspect of having a mission behind my work, but I found myself wanting to do something a little more creative,” he says, and the food industry proved the perfect avenue for this adventure. “I could do bagels without a traditional culinary background, so I just started putting the pieces together of what campus needed and what I could do…” Now Dave and his staff come up with custom “schmears” for a living.

The biggest aspect of Schmear It, right up there with the bagels, remains its social mission: spread good.

Schmear It donates 3% of profits to organizations that serve the local community. “It’s not yet thousands and thousands of dollars per cause,” Dave admits, “but we’d love to grow it there one day… The goal is really just to spread the word about these great causes.”

I ask Sadie when she got involved in Schmear It. “I graduated from Drexel in June, so I’m fresh out the gates.” She laughs. “I was working here during college, so I stayed on, became full time, and I’ve since taken over the social impact part.”

Sadie’s job is to build connections with these causes, and Dave is thrilled that she’s been able to “establish that more regular voice” for the store and “expand so much of what we always had an idea of wanting to do.” It’s clear they work well together.

Dave continues with this thread: “When we came into this space we were able to establish more of a permanent presence and also to really utilize that for expanding our relationships with these organizations.” The causes used to rotate on a bi-weekly basis, but now they’ve decided to do month-long features. “We’re able to host them in here for an event and kind of get the buzz going with our special and with the social media as well.”

Sadie gives some examples: “So, Girls Rock Philly… we invited them in on Sunday for a performance. Another thing that we’re doing is, since April is autism awareness month, the A.J. Drexel Autism Institute will be our featured cause, and we have, kind of in conjunction with that, hired one of their students.” Her face lights up. “She’s been working here for maybe two weeks now, and it’s been really awesome, like, a really great addition to our team. We’re learning as she’s learning.”

“It just makes it that much more tangible for everyone,” Dave adds. One of Dave’s favorite events was back in January when a class of kids from FirstHand Philly, an organization that gives kids access to STEM programs, visited the store. “We got to talk to them about entrepreneurship and how it’s important to have some sort of mission behind your work. And then we had a competition where we broke them into three groups and they created their own schmear. So it was like a little science in action.”

Schmear It will work with any cause or anyone if it means positively engaging with the community. “If even one student a year is really inspired by the cause and will come to volunteer [at these events], that would be a huge success for us,” Dave continues.

“Totally.” Sadie adds. Coming to those extra events would mean a lot to her, she says, “because I plan those and they’re fun!”

She adds that the best way for students to get involved is just “by coming in and supporting business that do good. That’s a really big thing… Come support the featured cause by supporting us.”

“That was sort of the premise,” Dave adds. “The reason why the one-for-one model is so compelling. It doesn’t take any extra effort for the customer… Why not?”

July- Back On My Feet

December- Round up highlighting the causes of the year