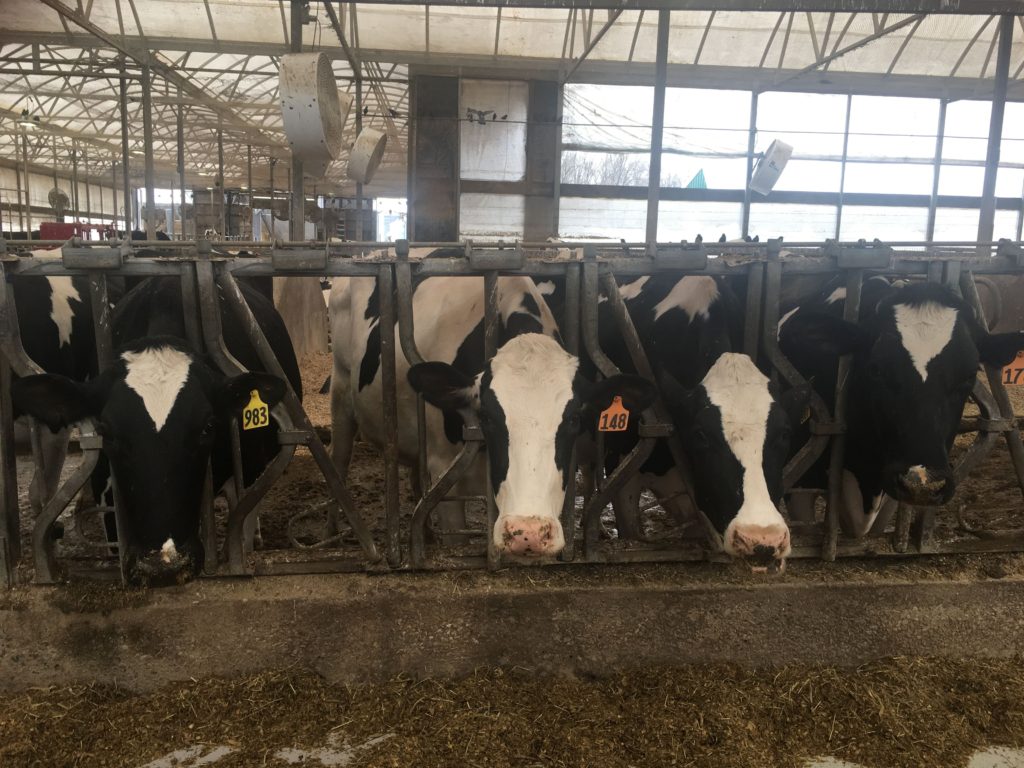 On the surface, Penn seems like a typical college campus. Libraries, dorms, classrooms, and dining halls. What you may not know is that Penn also has cows.

Granted, the cows (and the rest of the dairy farm) are about an hour away in Chester County. Penn’s New Bolton Center not only produces milk, but also serves as a research center for large animals. Penn Vet students learn about cows and the milk is sold to Land of Lakes to produce food. As part of my biology of food class, I visited the farm on a crisp March afternoon.

Upon entering the research area at the front of the building, I developed a headache from the methane. A Penn professor greeted our group and proceeded to tell us the basics of Holstein cows: how they’re milked, the fact that methane comes from cow burps and not cow farts, and why cow starts with a “c”. Afterwards, we spent a few hours walking through the milking parlor and cowpens.

Everything on the farm was organized to optimize efficiency. The soft mats on the floor helped lure the cows to the milking machines. The headlocks on the sides of the pens prevented the dominant cow from starving the rest of the herd. Even the feed was specially engineered to increase milk yield.

Dairy cows like the ones at the NBC spend most of their lives laying around and eating, with two breaks for milks, and they don’t seem to mind humans. One cow even licked my hand like a dog would when I held it to her mouth. After touring the farm for about an hour, it became clear that cows were just like any other domesticated animal.

With my newfound love for cows and former veganism, I had mixed feelings about the facility. I came to the dairy expecting to be horrified by the conditions that cows suffered. Instead, I found that the staff needs happy cows — the professor who guided our group reminded us that only well cared-for cows produce milk. At the dairy, cows received top-quality feed and medical care. From the perspective of a cow, dairy life seemed alright.

Happy cows can even mean a happy world. From an environmental perspective, cows can eat human food waste and parts of plants that humans cannot. Cow waste can be used as fertilizer. Cows can play an important role in the food system. Recent innovations that make milking more efficient reduce the carbon footprint per calorie of food.

Still, I couldn’t ignore the downsides of the process. When another student asked the professor whether he ate beef, he laughed and said that he saw them more like machines than pets. To me, that encapsulated the heart of the issue: the cows’ lives were optimized for humans. Even though the cows were happy at the dairy, I questioned whether they might be happier roaming a grassy field.

I realized there are more positives to dairies than I had previously thought: cows have a smaller negative environmental impact and generally, they are well-cared for. But still, I saw that cows experience cruelty in captivity, even though the dairy that I toured is much smaller and much nicer than a typical industrial dairy farm.

I won’t be cutting dairy out of my diet anytime soon, but now, after visiting a dairy farm, I have a better understanding of where my food comes from. I also learned, according to the professor, why cow starts with a “c:” they are crazy cool.