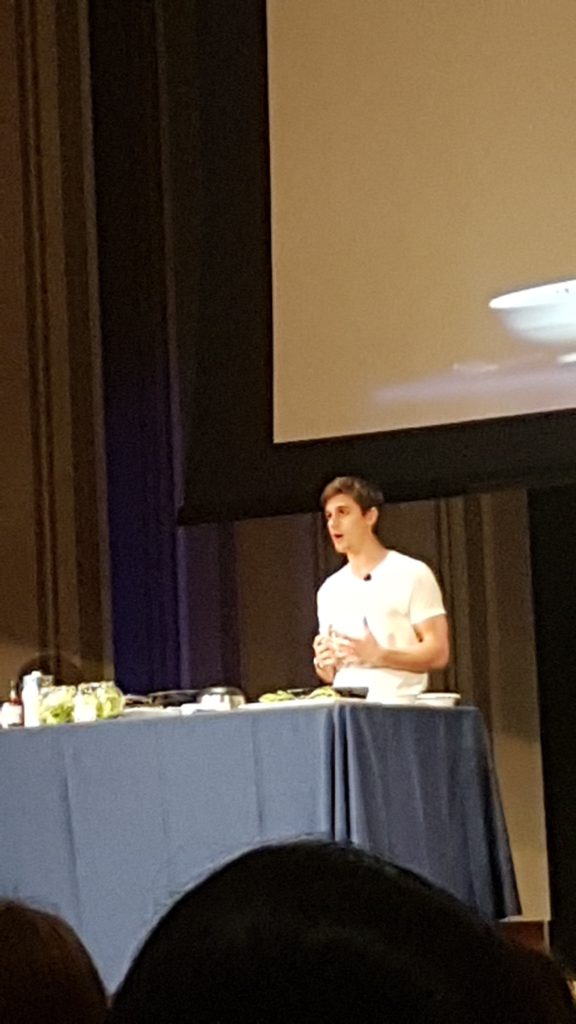 Even if I’m not an influencer, I like to consider myself quite influential amongst my circle of friends. It does wonder for the ego when you’re the trendsetter of the group, so I highly recommend it. Before “Queer Eye” became a huge phenomenon in Singapore, I watched and was blown away by the personalities on screen. And so the first thing I did after finishing episode 1 was to take a screenshot of each of the Fab 5’s Instagram profiles and sent them to my friends: a call to action. Sure, Netflix marketed extensively, but I marketed passionately and I’m sure Netflix’s that had some impact to some degree in some capacity in catapulting the show.

Suffice to say my inner fan boy geeked out a bit (ok, a lot) when I saw the poster for “An Evening with Antoni Porowski.”  So let’s dig into the meat of the night in question: ground turkey breast. For his cooking demonstration, Antoni decided to go with a Laotian-inspired Larb/Laab, a lettuce wrap containing a meat salad. However, I cannot stress the word “inspired” enough in the title of this dish; the ingredients of turkey and jalapenos are neither local nor popular in Southeast Asian cuisine. But from the get go, Antoni said he wanted to create something that was healthy and accessible so I’ll grant him creative license, as much as I personally mourn the loss of authenticity. Fish sauce, sugar, lemongrass, ginger and broth were used to flavour the turkey, after which it was enveloped in butter lettuce topped with sliced jalapenos, a squirt of lime juice and shallots soaked in water. The two volunteers called upon to participate – who claimed to be  inept at cooking – seemed genuinely impressed with their own creations.

This part of the event flew by, but there’s a deceptive quality with cooking demonstrations because all the prep work is done beforehand. Of course it seems it seems accessible when all the onions and carrots and cucumbers are cut, when all the ingredients are precisely measured, when all the utensils you need are neatly strewn in front of you. And that is my biggest qualm, because the prep work is the most extensive (and the most boring sometimes) part of the cooking process. The actual act of cooking is the easy bit, and by honing in on only that because of time constraints, demonstrations look a lot easier than they actually are. But once you get over that, that’s when cooking for yourself can be fun and exciting and rewarding. Know that your effort is going to be spent on both prep work and cooking – then there’s little else to deter you from it. So here’s a bit of unsolicited advice for anyone out there who fears the kitchen: the only thing to fear is the clean-up (cuz really that’s just no fun at all).

Finally, Antoni ended the night with an earnest, honest conversation about his upbringing, his views on LGBT+ issues, and his relationship with food and alcohol during his college years. The latter topic might give any person hope to know that Antoni went from a junk food devouring, balls-to-the-walls drunk (his words, not mine) to the funny, charming man of refined palette that stood before us that night. His other insights are not quite in the purview of a food blog such as this so I shan’t dive into it, but I will let you know that it was as heart-warming and welcoming as a nice cup of tea on an overcast and cold day – incidentally the current weather status as I write this.