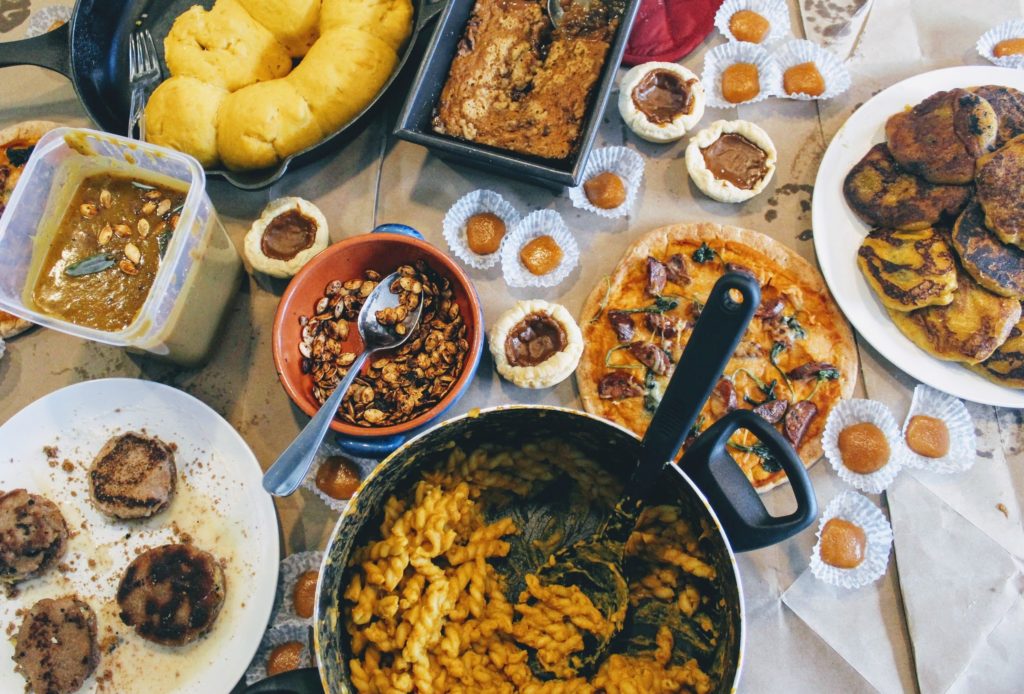 Like all of you, I associate October with pumpkins. Carving them, cooking with them and eventually eating them. So despite the fact that I’m currently looking out the window and wondering where on earth October went (September was literally yesterday!), it seems very fitting that we here at Penn Appetit had a pumpkin-themed potluck.

Saturday afternoon, I showed up at Janet and Michelle’s cookie-scented apartment with a box of spinach and four cans of pumpkin puree. Along with Jacky, we proceeded to spend the next hour and a half making pumpkin rolls, flatbread and cobbler while Grace deseeded a pumpkin. We started with the rolls since they had the longest prep time. Well to be honest, Michelle got stuck doing the majority of the work since she graciously volunteered to knead the dough and ended up with it gluing her hands together for almost an hour. We then proceeded with the flatbread and my personal favorite, the cobbler. Jacky roasted some sausage slices on the stove while Janet and I measured out the ingredients for the cobbler. (recipe note: we found walnuts to be a cheaper but equally tasty substitute for pecans). Mixing the little mounds of flour made me beyond happy – I’d forgotten what it felt like to bake in a kitchen that’s not the semi-underground Speakman lounge. But more importantly, I remembered how fun it was to bake with other people.

When I returned Sunday afternoon, all of the dishes had turned out perfectly. We carried the food up to the Radian lounge where Grace was waiting with a camera and pumpkin caramels (!!) and because camera eats first (I hate me too), we began to arrange the food for the pictures. We contemplated waiting for the stragglers but since most of us had skipped lunch in anticipation we just dug in. Every dish tasted even better than it looked. Shreya’s addition of chilli powder to her vegan pumpkin mac-n-cheese provided a nice kick that really made it stand out among the milder flavored carbfest we’d assembled. Nicole’s pumpkin tarts paired perfectly with her homemade whipped cream and we devoured half the flatbread in under five minutes.

Over the next hour the rest of the group slowly filtered in, carrying in pumpkin dishes beyond your wildest dreams. I’m just here to say, you haven’t lived until you’ve eaten Josephine’s pumpkin mochi or tried Luis’s arepas.

I left the potluck stuffed and happy and carrying an extra pumpkin roll, which is exactly how you should be leaving every potluck. I admit that on a regular basis I don’t think I could ever eat that much pumpkin but since it’s fall I happily made the exception.