Meet the Wharton MBA Disrupting Nutrition, One Bagel at a Time 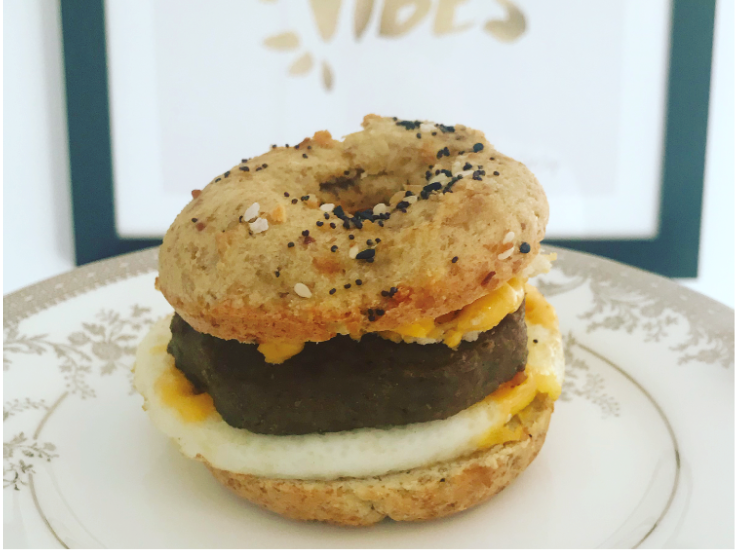 Bagels are never my breakfast of choice. Normally, I’m at an event and I realize I’m hungry. I eye the tray of bagels, and after pondering for a few minutes, begrudgingly pick out the one that looks the healthiest and spread cream cheese on it. With each bite, I remain unimpressed. A few hours later, when I am hungry again, I I feel guilty as I feel a sugar crash coming on.

Aimee Yang, a second-year Wharton MBA, is disrupting bagels. After leading operations in India and litigation strategy in New York, Yang was inspired by the spirit of innovation she found at Wharton. This energy drove her to rethink healthy eating and nutrition.

After speaking with hundreds of people, she honed in on traditionally carb-loaded bagels. With customer feedback in mind, Yang created over 600 versions of the Better Bagel before finally settling on a recipe. Throughout the process, Yang realized that baking was much more than throwing ingredients together. A bagel had to account for factors like taste, texture, shelf life, allergens, emulsification, leavening, and more. (Yang walked me through the massive Excel spreadsheet she used to track the hundreds of iterations and her notes… and wow, it was thorough).

Yang launched Better Bagel in February 2020. The Better Bagel is more flavorful, moister, and more compact than a regular bagel. It is also quite literally “better” — nutritionally, it’s gluten-free, contains no added sugar, and packs in just 120 calories.  Most impressively, it contains the same amount of net carbohydrates as a gummy bear (talk about guilt-free!). Yang recommends pairing it with egg and cheese, cream cheese and lox, or peanut butter.

In a few short weeks, Better Bagel has already made a splash. They have already reached thousands of people through Instagram (@better_bagel). The CEO of Juice Press, CEO of Hill House Homes, and co-founder of Cuyana have tried their product. They’re at both the Wharton and Harvard Business School Retail Conferences. Yang sees the quick traction as a sign that her message is resonating.

Customers will soon be able to order Better Bagel through the company’s website (www.betterbagel.co). The company is also in talks to sell their product via retailers that align with their values. Though it may take longer, Better Bagel is taking the time to select their partners carefully, forgoing places like Amazon to sell directly to consumers. According to Yang, Better Bagel stands for something– empowerment, innovation, disruption –and wants to grow organically with those values in mind.

In Better Bagel’s short history, Yang has thrived as an entrepreneur. She enjoys constantly engaging with people and having the power to create, disrupt, and innovate. For Yang, bagels are just the beginning. Yang hopes to build a more than just a better product, but rather an entire movement of challenging the status quo. According to Yang, “Better Bagel and its parent company, Better Brand, stand for innovation and empowerment, and it’s really important to us to build a community around those values.”

When I tried the Better Bagel, I was immediately impressed with how alive it seemed. Normal bagels are boring and dry; the Better Bagel was moist and had a subtle earthy scent. The first bite was filled with earthy flavors. Although I intended to save the rest, I ended up finishing it within a few minutes. It was thoroughly satiating, and I would never have guessed that it was gluten-free. In fact, the Better Bagel was delicious plain and untoasted.

What I was most impressed with, however, was how I felt afterwards. I normally leave my last class of the day feeling drained, as if I ran a marathon. The day I ate the Better Bagel, I was surprisingly still energetic at the end of the day. Four hours after trying the bagel, I wasn’t hungry. Instead of the emotional rollercoaster I normally feel when I eat a bagel, I felt satiated.

The Better Bagel made my day…well…better. I can’t wait to see what else is to come from Yang and Better Brand.