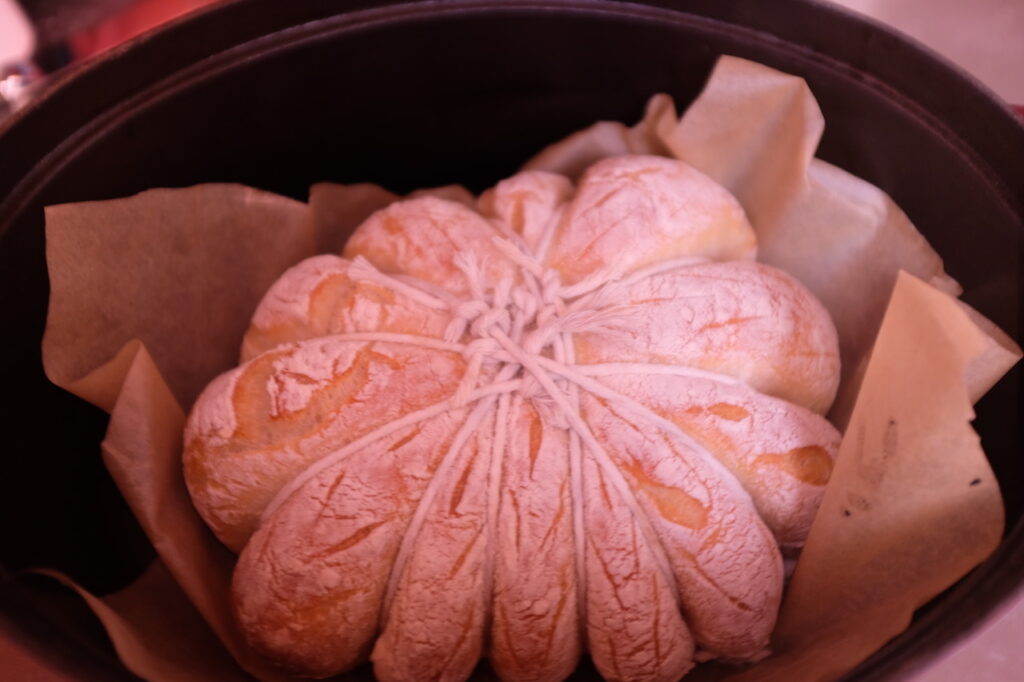 A few months ago, I found a pumpkin-shaped sourdough on TikTok and have been obsessed with it ever since. Like the rest of  America, my family and I got very into making sourdough on a weekly basis (my mom goes through phases of making it daily), and pumpkin-shaped seemed like the perfect seasonal upgrade. Now that it’s November, I felt like it was the ideal time to see if I could replicate the bread.

The process is fairly simple: all you need is an oven ready sourdough ball (I use Maurizio’s Perfect Loaf), some flour, a piece of parchment paper, a dutch oven and six pieces of twine (don’t use any other string because it needs to be heatproof). I do recommend watching the video for a visual guide but here’s a description of what I did:

Start by cutting six pieces of twine longer than the circumference of your dough ball. An easy way to judge this is to measure the string against the bowl it’s resting in. Then, place the six pieces of string so they meet in a point at the center on some parchment paper.

Gently maneuver your dough ball out of the holding basket where it has been rising and place it on top of the twine circle. Tie each piece of twine to its opposite end, forming a nice bundle of knots in the center. This is actually the trickiest part; I kept tying the wrong strings together. I recommend starting with the most central string and then, tie the ones that would be perpendicular to the central string. After, tie the other four in between. Once you have that down, take a small sharp knife and etch in little lines between the strings. This is totally optional but Mamabeast did it in her TikTok and I think it makes the bread look much cuter. Sprinkle some flour on top and it’s ready to bake!!

My first couple of attempts weren’t my favorite, but I think this had a lot to do with me not letting the sourdough rise enough beforehand, as you can see here it’s a little flat. When I remade it a few days later, it looked much better, although not quite TikTok worthy yet.