Best Pies of the Keys Sophie Meinen
Bringing Back the O(h!) in Avocado Toast Emily Liu
5 Ways to Spice Up Your Ramen Game Haley Kang

The Miracle Mushroom: Why I am Now Obsessed With Chaga 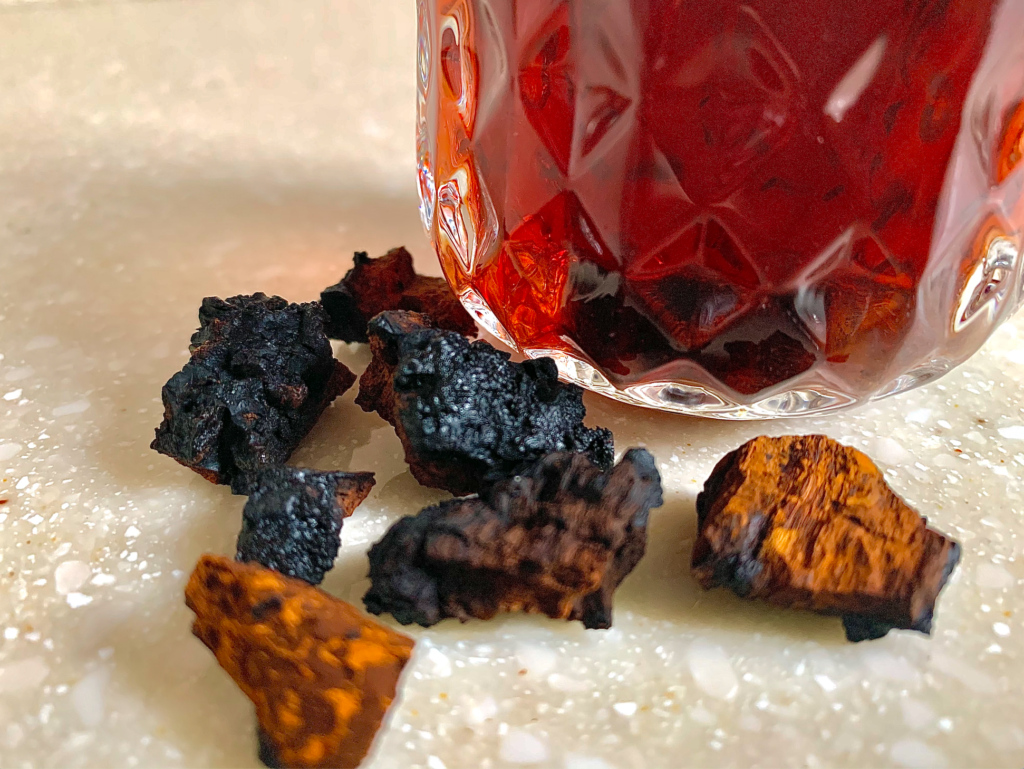 You’re walking through a white birch forest in upstate New York in the heat of July. Surrounded by identical birches, your friend that’s a little too into environmental science picks out a tree in the crowd. Without warning, your friend scales the tree and uses a hatchet to dislodge a dark mass protruding from the tree. This was the situation I found myself earlier this summer near the Berkshires.

After much confusion and further explanation, I discovered that the object my friend removed from the tree was a chaga mushroom, a fungus that is parasitic to many birch trees, but is symbiotic with the white birch. The white birch and the chaga mushroom both benefit from each other, thriving in their symbiotic relationship.

What Are the Health Benefits of Chaga and Why Do I Care?

This inconspicuous mushroom is actually a very powerful antioxidant, and has an ORAC level of 6.5 times higher than açai. ORAC, which stands for Oxygen Radical Absorbance Capacity, is a scale that measures the extent to which a substance can absorb free radicals in the body, which damage our cells and DNA. Some other benefits include anti-aging properties, inhibiting carcinogens, lowering blood pressure and cholesterol, and supporting the immune system, an especially pertinent benefit given the current pandemic.

How Can I Consume Chaga and What Does it Taste Like?

I can go on all day about the positive health effects of chaga, but I know what you’re probably most concerned about is the taste. What does chaga taste like and how does one consume it? Well, the great thing about chaga that I have found is that it embodies the scent and taste of the forest or mountain it was found at, so each mushroom has its own unique taste. Though each mushroom differs, each chaga has a very earthy and woody taste and often tastes of muted molasses or honey. Even if you can’t find a birch forest to obtain your chaga, you can still buy a pack of the mushroom at select grocery stores. These packages often feature the region the mushroom was gathered from.

The most popular way to consume chaga is by boiling it to produce tea. The chunks of mushroom can be boiled on the stove until the water turns brown, at which point you can strain the tea and save the chunks of chaga for later. Just make sure to pat the mushrooms dry after every use and store them in a dry environment. The chaga becomes less potent with more uses, but you can still get a lot of use out of just one chunk of chaga. The chaga tea has also been marketed as coffee—as it’s called in Siberia—and as is with coffee, you can add creamer or your choice of milk to the drink, which I believe enhances the flavor.

Are There More Creative Ways to Work With Chaga?

Although chaga is most known as an antioxidant mushroom tea, people have actually found ways to explore the mushroom through more creative avenues. Just because chaga is healthy, doesn’t mean that you can’t have fun with it. Below I have offered my own recipe for a chaga mousse dessert as well as links to a few recipes others have created over the years to appreciate chaga in new and innovative ways. Have fun with your new superfood!

Best Pies of the Keys Sophie Meinen
Bringing Back the O(h!) in Avocado Toast Emily Liu
5 Ways to Spice Up Your Ramen Game Haley Kang