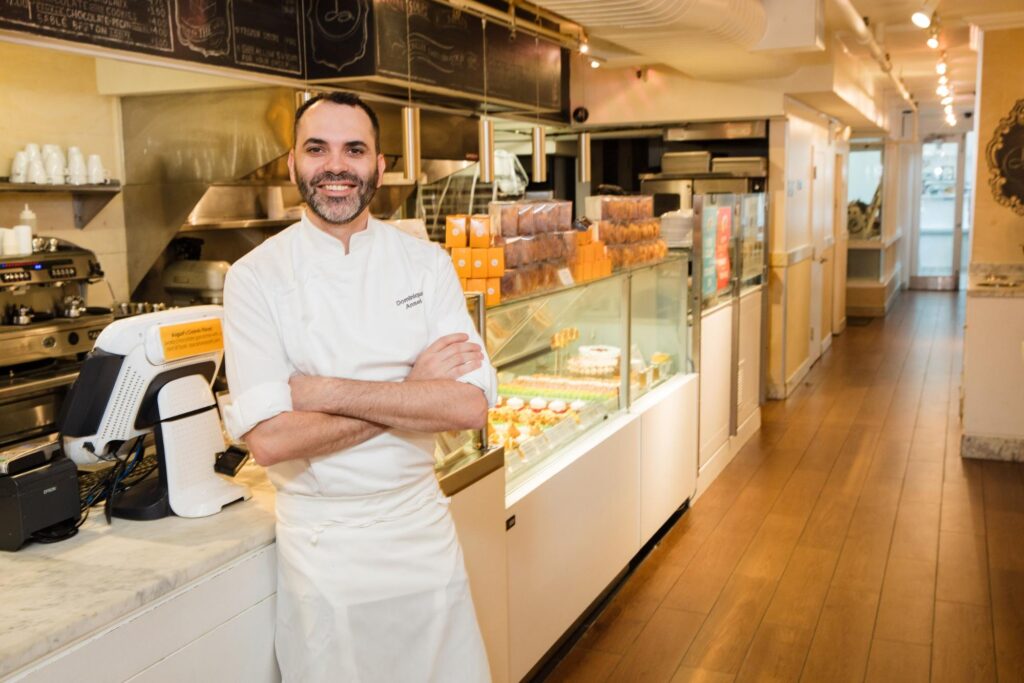 With Penn being so close to New York City, you might unexpectedly find yourself in the city every now and then. While a trip into the city calls for sightseeing tourist attractions and shopping on 5th Ave, one of my personal favorite things to do is explore its expansive food scene. In my most recent trip to NYC, I fell in love with the Dominique Ansel Bakery.

Dominique Ansel, a French-American pastry chef, has two bakeries in New York City: Dominique Ansel Bakery tucked within the quaint streets of Soho, and Dominique Ansel Kitchen, in the West Village. You may know him as the creator of the Cronut®, which was included in Time Magazine’s “25 Best inventions of 2013”. Despite the Cronut®’s international fame, Ansel himself came from humble beginnings.

Raised in a small town a little north of Paris, Ansel first dabbled in the food industry after high school by working in a restaurant to help support his family. He attended a free culinary school in his hometown and fell in love with the scientific precision required with baking pastries. After serving in the military, Ansel moved to Paris in a car he could barely afford where he luckily landed a spot at Fauchon, a company exemplifying precisely what it means to produce luxury gourmet food. In 2006, he moved to New York City and worked as the head pastry chef at Daniel, earning the French restaurant its third Michelin star, and ultimately opened up Dominique Ansel Bakery in 2011. His grit and determination won him a multitude of awards, including the James Beard Award for Best Pastry Chef, Ordre du Mérite Agricole (the second highest honor in France), and World’s Best Pastry Chef by the World’s 50 Best Restaurants Awards.

Following his invention of the Cronut®, Ansel never stopped innovating, producing the chocolate chip cookie shot, the frozen s’more, the Dominique Kouign Amann (DKA), a lemon yuzu yogurt tart, an avocado toast ice cream sandwich, and more. Many of his creations have gone viral, including the Blooming Hot chocolate (hot chocolate topped with marshmallow flower that actually opens up with the heat of the drink) and what-a-melon soft serve (watermelon ice cream served inside an actual watermelon and embellished with chocolate seeds) and of course the Cronut®. His inspiration for his creations often come from the various locations of his stores, offering special pastries unique to the location of the store.

Here’s 10 questions we got to ask Dominique Ansel himself!

1. What about pastries captivated your interest?

I always say that pastry is a perfect combination of science and art. It has the precision of a scientist and the understanding of the chemistry behind baking, but also the beauty and emotions of art.

2. What is your baking philosophy? How would you describe your own baking style?

I believe in understanding the fundamentals and building a good foundation before adding in the twists. First, bake. Then create.

3. You consider a bakery to be a local business and believe it should cater to the local people. In addition, you often draw directly from the culture of the area to inspire your creations. What culture have most enjoyed being influenced by and what culture do you wish to experiment with next?

I really loved conceptualizing our store in Hong Kong, which is called Dang Wen Li (in Cantonese it sounds like my first name). The idea was to create an alter ego, and imagine if I had grown up in Hong Kong, and apply the same creativity we do regularly, but to HK culture and desserts. It was wonderful to push the boundaries that way and not make cookie cutter, copy and paste bakeries.

4. From working at Fauchon to breaking the internet with your cronut, your journey in food has come a long way since you started working at “Cour et Jardin” in Beauvais, France, your hometown. When in your career did you feel you grew the most?  As a pastry chef? As a human? Were there any memorable turning points in your career that changed the way you view baking?

It’s difficult to say. I used to call Fauchon my pastry “university” because there was so much I learned in my 8 years there. But then Restaurant Daniel here in New York became my first home in America and I learned not just how to be a good chef, but also about hospitality from Daniel Boulud. The focus became less about the techniques and the chefs in the kitchen and more about the customer. And these days, I continue to learn daily. Starting your own business is something you can never prepare enough for.

5. As a winner of the World’s Best Pastry Chef award and someone who has much more experience than I do, what do you most appreciate about a good pastry? What characteristics should a pastry possess to impress you?

A great pastry to me has to be something more than just tasting and looking good. I think the very best pastries have an emotional power and bring back a memory or a moment. That’s what separates the icons from the seasonal creations.

I wasn’t setting out to merge the croissant and donut. I was actually thinking of just making a donut. But since I was French and didn’t have a recipe, I thought I’d try another dough and a different method.

7. You and your team refer to the time before the creation of the Cronut® as BC (before Cronut®). You refer to this period as a “simpler time” and seem to remember that period of time very fondly. What do you miss most about the BC era?

What did I miss? Well, I guess being younger and getting more sleep.

8. You’ve always valued your team and your customers, making drinks for your team and greeting them in the mornings when you open. This has become almost like a ritual for you. Why has this become so important to you?

It’s one of my favorite parts of the job. Meeting people and being able to spend time with them. It’s not just about the pastries, it’s about the people. During these uncertain times during Covid, one of the best things has been able to see the neighbors on a regular basis and still be here for each other. Our very first customer put on a mask and gloves and traveled over to the bakery just to support us, and it has meant the world to our team.

9. I went to your Soho bakery last spring and my favorite treat I had tried was the DKA. I know that the DKA is also one of your favorites. When you were creating the DKA what qualities were you trying to perfect? What do you hope people would notice when they eat the DKA?

Back then it was just the KA (kouign amann), I guess. I learned how to make a kouign amann in Fauchon because my chef was from Brittany, where it originated. But then over the years I experimented with the recipe and reduced the sugar and butter to make for a lighter quality. I used to make it for our manager’s meeting as a snack at Daniel. And one day a small line formed from folks who wanted to try it, and I thought to myself that when I open up my own shop, I’ll put it on the menu as all the chefs at Daniel were hooked. That’s when it became the DKA (Dominique’s Kouign Amann). And you’re right, it’s one of my favorite things on the menu.

10. At the age of 42, you have already changed the pastry world, opened stores around the world, and written two books. One of the things, I personally admire most about you and your work is your drive to always create. How do you plan to continue pushing the boundaries of the food scene and what will you be creating next? Any major projects coming up?

It’s been a crazy year, but we managed to move forward. We launched shipping to 48 states this past month (at dominiqueanselonline.com). And soon, we’ve just started offering online classes (at dominiqueanselclasses.com). And next year we’re opening up a new shop and test kitchen  in the Flatiron district. I think it’s not about setting a plan to be creative. It’s a lifestyle. You live it and can’t help it.

Dominique Ansel is definitely a name that every foodie should know and somebody that I find personally inspiring. His work has stretched the definition of a pastry beyond its limits and I have no doubt he will continue to change the pastry game. Keep an eye out for his next creation…it might just go viral!